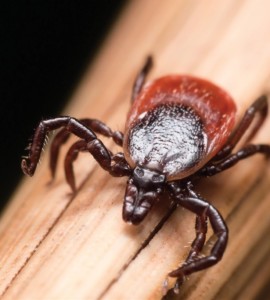 A well thought out Tick Treatment Program for your property can greatly reduce or prevent the risks associated with tick activity.  Ticks are an annoying and sometimes dangerous pests. Deer Ticks and other species of tick, are known vectors and carriers of very serious and potentially deadly diseases. Ticks pick up disease pathogens or spirochetes when feeding on smaller animals and rodents, and then act as a vector capable of  transmitting these pathogens to humans and other species as the tick matures.

Black Legged Ticks (Isodes scapularis) also known as “Deer Tick”, are found throughout Massachusetts. The Black Legged Ticks are the primary vector for a variety of diseases including Lyme, babesiosis, and ehrlichiosis.

Over the past 10 years over 100,000 cases of disease caused by deer ticks have been reported. Deer tick populations continue to increase and as their populations grow so does the risk of contracting a tick-borne disease. As a consequence, there is an increased demand for pest managers to develop and implement effective deer tick control programs in both residential and recreational areas. 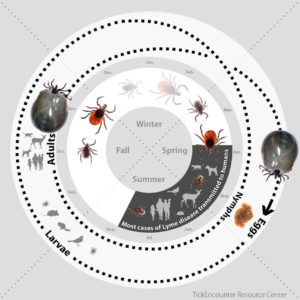 Deer ticks are parasites and must feed on blood to survive and reproduce. They begin their life as tiny eggs, which hatch into sexually immature larvae about the size of a grain of sand. The mobile stages of this pest climb onto foliage or structures like fences or buildings waiting for potential hosts to wander by.

The larval ticks infest small animals, such as mice or birds, for several days, taking in blood until they are engorged and drop off the host, usually into leaf litter or thatch.

The engorged larvae molt into sexually immature, eight-legged nymphs, which are about the size of a poppy seed. These nymphs then take a blood meal, usually on a small to medium sized mammal such as a squirrel or rabbit, feeding for four or five days.

The engorged nymphs drop off the host and eventually molt into a sexually mature eight-legged adult. The adults latch onto a large mammal such as a deer where they mate where the females subsequently attach and feed for about a week. They then drop off and lay eggs.

This whole process can take two years with peak activity occurring in different seasons. From a public health perspective, it is most important to control the nymphal ticks because 90% of all Lyme disease cases are due to bites from this life stage.

Ultra Safe is a partner of the University Of Rhode Island’s TickEncounter Resource Center. Our best management practices for Tick Control are based on information from the University’s product testing and field research.

Our ‘Integrated Tick Treatment’ Program was developed in part by the University Of Rhode Island’s top Tick Control Entomologists.

The UltraGuard ‘Tick Program’ is performed twice a year during the high-risk reproductive Tick seasons of April-May and again in August-September. This type of treatment is proven to maximize control and decimate deer tick populations in treated areas.

Tick Treatments in Massachusetts focus on “High-Risk” areas and Tick breeding sites around the yard and surrounding areas of a property. Contrary to popular belief, a well maintained and regularly cut lawn is NOT attractive to ticks. Ticks prefer denser vegetation, leaf litter and shady crevices to hide from direct sunlight and predators. These areas are typically found around the perimeter of lawns, landscape islands, rock walls etc. 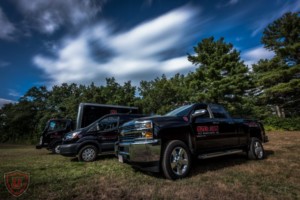 Perimeter spray treatments are eco-friendly by limiting the amount of pesticide being applied, and targeting the areas where people most frequently come into contact with deer ticks.

The chemicals used today for tick control are much less toxic than in the past, and are used in very low concentrations. Additionally, Bifenthrin and permethrin do not leach through soil; these chemicals are degraded by soil microorganisms within the top 4 cm of the soil surface.

Note: Pyrethroid products should not be applied around fish ponds or streams. Watch our video about Perimeter Spray Treatments

Outdoor placement of Tick Control Tubes in areas where mice and other rodents will frequent. (rodents play a big part in the tick-borne disease cycle) When larval blacklegged ticks hatch from eggs, they generally are pathogen-free (several studies from a number of laboratories have failed to detect any human disease-causing pathogens in newly hatched larvae). Ticks become infected with disease-causing pathogens when they feed on reservoir animals.

Most studies support the notion that white-footed mice (Peromyscus leucopus) are the main reservoir host for Lyme disease spirochetes, Babesia protozoa, and Anaplasma bacteria; in most settings, mice are the primary culprits for producing infected ticks. These mice are common and often quite abundant in rural, suburban, and semi-urban settings across much of the eastern United States. 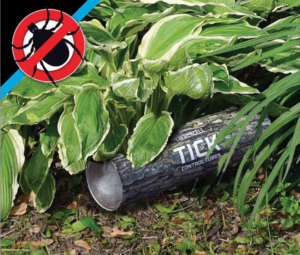 Developed at a leading Lyme disease research laboratory at the Harvard School of Public Health. Based on the scientific study of ecology of the deer tick and the field mouse, the respective vector and the reservoir of the disease.

Enlist the aid of the common field mice by providing them with pesticide-treated nesting material, cotton balls, in biodegradable cardboard tubes which are placed out in brush and flower beds (not on lawns because mice do not make their burrows on lawns).

The mice find the tubes and collect the cotton for their nests. The pesticide on the cotton gets on the fur of the mouse, and is brought into the burrow. The mouse is transformed into a very efficient tick killer but is NOT harmed itself.

Tests have proven that the risk of encountering infected ticks on treated property can be reduced up to 90% by the using Tick Control Tubes.

How Do Tick Control Tubes Work?

Tick Control Tubes use the pesticide, permethrin, which does not hurt mice, other mammals or birds, and is so mild that it has been approved by the Food and Drug Administration for use in a head louse shampoo for children.

Permethrin is a synthetic form of the naturally occurring pesticide, pyrethrum, an extract from flower heads of the chrysanthemum. Permethrin is highly neurotoxic to ticks.

An environmentally responsible treatment that effectively gets to the root of the problem without harming other life forms and vegetation. The cardboard tubes are biodegradable and do not need to be inspected, picked up, or discarded. They will eventually breakdown harmlessly and disappear, but not before they have killed hundreds of Lyme disease carrying ticks.

Applied twice a year, in spring and in mid-summer (as late as mid-September) to coincide with the two appearances each year of the ticks.

Deer ticks are NOT out in the middle of your groomed lawn, they live where yards border wooded areas, ornamental plantings and gardens, or anywhere it is shaded and there are leaves with high humidity. By raking leaves, trimming shrubs and low branches you can make certain areas where ticks cannot survive.

Pay special attention to frequented border areas, woodpiles, stonewalls and sheds. Creating borders of wood chips stone or any other landscaping material helps to serve as a reminder between tick-safe and Tick-danger zones.

Do NOT Attract Wildlife

Ticks are brought to your yard by deer and become infected mainly by feeding on mice. Keep deer out by planting undesirable plants, installing deer fencing or applying deer repellents. Mice like to live in stonewalls, around sheds, woodpiles or any enclosed area they can get into.

Clean up brush, keep stonewalls clear of leaves, move woodpiles away from daily activity. Bird Feeders also attract deer and rodents that may drop ticks off right where you are standing.